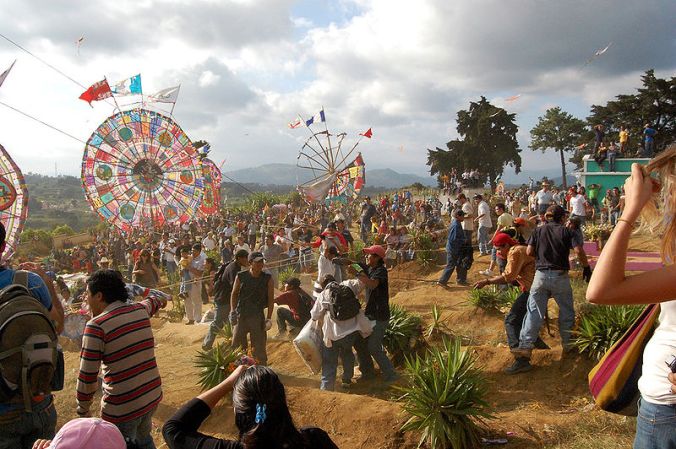 The Spanish speaking world is full of a variety of festivals.  From the perilous San Fermín to the picturesque Fiesta de los Patios en Córdoba or contemplative Semana Santa.  If you look further afield you will find El Día de Los Muertos/El Día de La Muerte,  and El Yipao in Colombia.

AQA refers to this topic as “customs and festivals in Spanish speaking countries/communities”.

Pearson/Edexcel refer to it as “celebrations and festivals”.

WJEC refer to it as: “festivals and celebrations”.

The ideas discussed in this blog and inevitably the language used will unavoidably favour the exam board I’m currently preparing my students for.  Nevertheless the ideas themselves should be applicable to any exam board and adaptable to languages other than Spanish.

It is worth considering how a module like this one might be examined.  It could be tested by all four skills

Here are some activities I have tried over the course of teaching this module.

This was an idea from a colleague of mine and one of the best MFL teachers I know.  The ultimate aim is that students produce a VLOG (video-blog) in which they describe a Spanish festival.  A growing number of the students I teach want to be “Youtubers” so they welcomed this idea.  Students were told they can appear in the VLOG if they choose or they could do something similar to Tio Spanish.  The main rule was that it was them doing the talking.  The structures I wanted the students to be using included the following:

it celebrates, it takes place in, it is, there is/are, you can see, you can, it starts, it finishes, it lasts, it is one of the most … , it has, it involves, it includes, I would like to go, because it looks, i would recommend it because it is.

Part 1: 2-3 lessons of controlled listening, reading, speaking and writing practice ensued trying to recycle these structures as much as possible.  I had been reading quite a bit over half-term and wanted to try out some new ideas.  One source of ideas was The Language Teacher ToolkitThe Language Teacher Toolkit.  Another was the Language Gym Blog.   A number of these formed part of the lesson and I wrote a number of texts that recycled the target structures above.

Part 2: I took the students to the ICT room.  They researched key details about a festival from a selection I had produced.  No-one did La Tomatina because that was on the scheme of work for subsequent weeks.  After that students produced a script using as many of the target structures as possible.

Part 3: They handed in their scripts, which I marked.  They then corrected and improved it based on feedback they were given so that their VLOG recording is grammatically sound.  As part of this, they also had to underline any words that they felt were tricky to pronounce.   Those that finished this redrafting process worked with me on how to pronounce the words.  Others were directed to Voki.  Whilst not perfect, it will do the job.

Sometimes it is worth investigating a little more to find out some more festivals out there.  UK textbooks tend to emphasise la tomatina or navidad.  I think the former because it captures the imagination and the later because students can relate to it.  One student was quite motivated by the fería de caballos in Jerez.  Another really enjoyed looking into la mistura peruana (Peru’s food festival).  Día de amistad (South America) was perceived to be a great idea by another student and they wondered why we don’t have it here.

This was a way of practising the key vocabulary around festivals.  Here’s how it works:  Frodo draws 9 dots on a whiteboard in a 3×3 pattern.  Frodo then joins up 4-5 of the dots consecutively like an Android phone password.

On the screen have 9 squares with phrases in.  These correspond to the 9 dots.

The main aim here is repetition of vocabulary and familiarisation with the target structures.  You should advise students beforehand not to use their actual phone password.  You would think it might not need saying, but it does.

Trapdoor seems to be a staple of MFL teacher PowerPoints on TES.

Danielle was kind enough to let me use this example of trapdoor. You should visit her site: Morganmfl

The prevailing methodology seems to be that students restart when they get it wrong and go back to the beginning.  A slight twist I have tried recently is giving students a number of lives.  They then have to reach the end alive.  This means that they have a greater chance to use all of the vocabulary on the activity.  I tend to base the number of lives on 1-2 guesses per section.

For festivals I used the idea of a past tense account of the festival including the following vocabulary:

Again using the same principal as the trapdoor activity above.  Students have to guess what their partner is thinking.  They can only tell their partner how many they get right.  Place a table on the board with 3-4 columns.  The original game to the left uses four.  Personally, I prefer three for MFL lessons.  One student writes the target phrases in their book.  The other tries to guess the phrases that they have written.  This can be made quicker by giving students a number of lives.  It also means both students are likely to get a go.  Students seem to enjoy this one.

If this is the answer, what is the question

In the subsequent lesson, I jumbled up the TL questions and TL answers and asked students to match them.  The answers were on the left of the slide and questions on the right.  To increase the level of challenge in this activity, you could have students create the questions themselves.

Have four boxes of text on the screen.  Three of the boxes all partly describe a festival.  The final box should have some details that do not correlate with the others.  Students need to work out the festival as well as which box does not help them.  The idea behind this was to give them practice of filtering out the distractors when looking at higher level reading texts.  Depending on the level of your class you can make this as subtle as you feel is right.

I’m not quite sure where I would be without a set of 6 sided and 12 sided dice in lessons.  Aside from the rather popular “one pen one die” activity, you can do a variety of things.

Improvisation – students make a sentence based on prompt.  You could add a minimum word count to stretch them.

I’ll be honest with you; it is not extreme but the name seems to have an effect on classes.  Find a snakes and ladders board.  Set sentence-making challenges for anyone who lands on a number ending in 1,3,5,7,9.  You could also add a snake stopper and ladder allower.  These should be tricky tasks.

1  Where was the festival?

Snake Stopper: make three sentences about a festival that includes the words … , … and …

Ladder Allower: Describe a festival you wouldn’t go to and why

If you have managed to read this far then well done!  Feel free to tweet any ideas to @everydaymfl or leave a comment below.